Anyone can join in, starting today! As a massive Susan Cooper fan, I’m really excited to be reading the book again and sharing thoughts with others.

Hello to new visitors in search of #thedarkisreading, an unexpected Christmas delight. Read on!

‘This night will be bad, and tomorrow will be beyond imagining…’ tweeted @RobGMacfarlane, posting a photo of a gift copy of Susan Cooper’s classic children’s novel The Dark Is Rising(1973).

‘A wonder!’ I replied ‘I reread it every Christmas too – maybe we should have a twitter book club on it this year … ‘

Thousands of retweets, messages and retweets later, here we are. This winter, join over a thousand other people in a worldwide real-time read of Susan Cooper’s seasonal fantasy.

We’ll start (as the novel does) on Midwinter Eve / 20th December, and run through until Twelfth Night / 5th-6th January (the day the novel ends).

How does it work?

Very simple. The group is joined by the hashtag #TheDarkIsReading (thank you @mattlibrarian for that stroke of genius). Conversations, reflections, contributions can be searched…

(A post I wrote for An Awfully Big Blog Adventure)

It’s that time of year again. A few days off and you might think you’re going to be able to finish a draft or a book edit, or maybe get some brilliant new ideas jotted down. Well, forget it now. You won’t. Or at least, I won’t. December is basically sabotaged by a logistical nightmare called Christmas.

I was talking to my father earlier, trying to pin down the subject of the turkey size needed while listening to his lugubrious ‘if I’m spared’ remarks about his chances of making it to Christmas dinner. He’s 90, so I guess it’s fair enough, but I felt like screaming Dad, it’s less than two weeks away, and we seriously need to talk about the turkey. Just try and live another ten days, and I’ll do the rest!

While we were discussing life, possible death and turkeys, he told me there were only two Christmases in his entire life that he really remembered. One was when he was doing national service and his ship was moored in Penang – he spent Christmas by a swimming pool at a rubber plantation, with a gibbon wrapped around his neck. The other was when he was a boy, and the house next door caught fire. He and my grandfather rushed out to watch the flames shooting out of next door’s roof, leaving my grandmother to wrestle with the turkey. 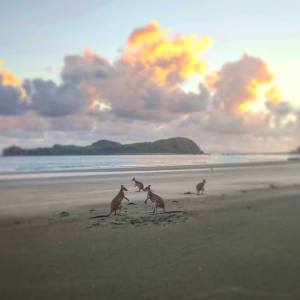 Anyway, it got me thinking about the whole business of Christmas and how one turkey Christmas dinner generally blurs into another. It’s only when something different happens that you remember it. One of my daughters is in Australia this year, and sent me a picture of a dawn trip to a deserted beach, where Kangaroos were boxing. She’ll rememberthat for the rest of her life, and I’m really pleased she’s having that experience and not worrying about the impracticalities of turkey to oven ratios.

I asked my other kids (all adult now) if there were any Christmases they remembered from childhood. Apparently the one that stood out was the one when I didn’t realise the turkey gall bladder had burst into the gravy, and ruined everyone’s Christmas lunch by pouring it over their plates for them (they were too young to pour it themselves). Pfft. All I can say is at least it made for a memorable Christmas, and they learnt the true meaning of the phrase ‘bitter as gall’.

Gallstones can be quite attractive. This has nothing to do with turkeys, but it’s quite interesting

I polled a number of writer friends to find out if other families fared any better. One told me that she and her daughter decided one year to ban family altogether, and just do what they wanted. They went swimming in the morning and had fish for lunch – and had the best Christmas ever. I have to say, this made me feel envious. No wrestling with family feuds and giant turkeys sounds like heaven.

Alan Garner books made a gift to remember

Christmases abroad cropped up in several accounts – like Sally Nicholls, who at 18 spent her gap year working in a hospital in Japan. Christmas isn’t celebrated there, but on Christmas day she and some fellow expats put on a variety show for the patients, including a rendition of English songs translated into Japanese. She can still sing ‘Gloop, gloop went the little green frog one day’ in Japanese, proving it was definitely a Christmas to remember.

Romance seems to make for a Christmas to remember too. Huw Powell  proposed to his (now) wife on Christmas Day, and Jenny Sullivan’s (now) husband spent three hours trying to get her father on his own one crowded family Christmas to ask for her hand in marriage.

Discovering pregnancies at Christmas seemed to be a recurrent theme as well, and probably very lovely even if it means you can’t drink – which come to think of it is possibly why these Christmases were remembered better than others!

Last but not least, the magic of a white Christmas. Several people found snow falling at Christmas made it particularly memorable (it doesn’t ever snow here in the West Country at Christmas, so I may need to drive north one Christmas to experience this…).

As it turns out, no one said writing or editing their book made for a memorable Christmas, so think I’ll abandon that idea right now. Too late to book a trip to Oz for a beach bbq, but am hoping to make this a Christmas to remember without ruining the gravy – and hope you all have a good one too. Maybe we can compare notes in January…

This is a link to my post on An Awfully Big Adventure today.  For some reason WordPress doesn’t let you simply reblog from a different site – which is quite annoying…

A link to a post I wrote for An Awfully Big Blog Adventure this month, about the obsession many of us have with notebooks…

An Awfully Big Blog Adventure: Notebook Nirvana – Lu Hersey: Practically any writing class – or creative writing handbook –  is going to tell you to make it your number one priority to always have a n…

My April piece for The Awfully Big Blog Adventure:

Remy Dean interviewed me for the Scrawl before Christmas. A lot of the interview is about my favourite children’s authors. I left out loads, but recommended as many as I could while trying to avoid the whole thing becoming just one big list. If  you’re looking for book recommendations, it’s full of them. 🙂

Lovely (and brilliant) writer Rebecca Mascull interviewed me about writing techniques, magic and all the elements in Deep Water. Includes elements of Freud and fear of large fish… 😉

Today is the final day that the Guardian are running their wonderful Children’s Books site. It’s a very sad day today for me, and for all writers and readers of children’s and young adult literature. On the plus side, the Guardian are incorporating children’s books reviews and some other aspects into their main site – but surely it can never be the same as having this very special, unique resource. The Guardian Children’s books site is something I’ve enjoyed practically every day for the last five years.

There are very few places in the national press where children’s books get any reviews, or much coverage at all, even though they account for over 30% of ALL book sales. Reviews in national papers are generally limited to a few books each month, often high profile books (ones publishers have invested heavily in), or ‘safe bet’ books written by authors who already have a good track record. The Guardian Children’s Books site was an exception – and provided a fantastic resource for everyone.

What made the site so different was its inclusivity. It gave space for children to write book reviews themselves, encouraging both reading and literacy. It provided a platform for authors to write articles about their new books, which almost always included lists of other children’s or YA books that inspired them. And where else do book illustrators get a chance to teach us how to draw a tiger, or a dinosaur?

As a former copywriter, I’m all too aware how important advertising revenue is to papers and magazines. Someone has to pay for content, because no one is going to volunteer to run an excellent site like the Guardian’s Children’s books site, on a daily basis, out of the goodness of their hearts. Yet the site provided one of the best resources for children, parents, booksellers, writers and educators – enabling all of us to discover great children’s books on all topics….and surely, by default, a site of great value to children’s book publishers too?

Rather than letting something as valuable as the Guardian Children’s books site disappear, I’d like to put forward a proposal. If every publisher of children’s books in Britain helped to sponsor it, not with specific advertising, but by providing a relatively small amount (by industry standards) towards maintaining it, perhaps we could keep it going?

Author Liz Flanagan interviewed me about writing myth and magic

Really enjoyed doing this post for Tattooed Mummy (aka Naomi) – it’s worth taking a look at the answers all the authors come up with for her wonderfully random questions!